She's a big bad beautiful 1988 Island Packet 38. Two bedrooms, two bathrooms, (we call 'em "heads" on a boat) and plenty of teak inside. Designed by Bob Johnson and built in Florida. Line drawings and more details on the 'photos' link, under 'older photos here'. With four feet of draft she's the perfect Bahamas boat, and with a mast height of 51 feet she fits under all the bridges from Mobile Bay to Knoxville. (Barely.)

To say this is the realization of a dream would be a significant understatement. More about that under "Chasing the Horizon". 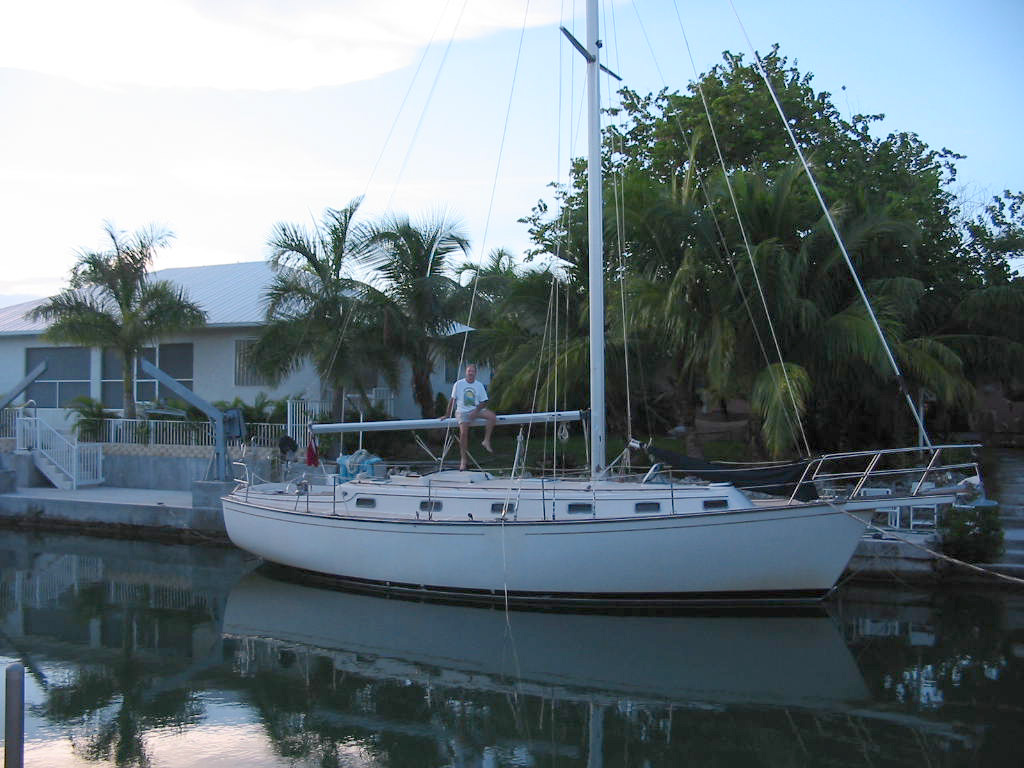 Good-bye Capt. Dan Capt. George "Dan" McLaughlin Sr., 73, of Toms River, NJ died Tuesday, Nov. 13, at home. Born in Paterson, he lived the first half of his life in Toms River and then the second half in the Florida Keys, returning recently to Toms River. He was the owner/proprietor of Key Dear Bar & Grill, Big Pine Key, Fla. Dan was a U.S. Navy veteran, serving during the Cuban Missile Crisis. He was a member of the Moose Lodge, Big Pine Key, Fla. He was a Modified Race Car Driver and enjoyed all aspects of the sport. During his time in the Keys, Dan charted a sailboat, bringing passengers from Miami down to Key West and back again.

He was predeceased by a granddaughter, Shannon McLaughlin. Dan is survived by a son, George "Dan" McLaughlin Jr. of Toms River; four daughters and three sons-in-law, Donna Ann DeCicco of Barnegat, Janine and Brian Berhens of Toms River, Kathleen and Brian Wilbert of Forked River, Lacey, and Lisa and Scott Goodale of Toms River; 12 grandchildren, Tommy, Sean, Jena, Christopher, Edward and Kristen DeCicco, Tony and Mark Spina, Tiffany and Kyle Wilbert, and Shelby and Zachary Goodale; and his fiancee, Deborah Stubblefield of the Florida Keys.

A memorial gathering will be from 2 to 5 p.m. Sunday, with a funeral service at 4:30 p.m. at the Carmona-Bolen Home For Funerals, 412 Main St., Toms River. In lieu of flowers, donations to the American Cancer Society, Jersey Shore Region, 1035 Hooper Ave., Toms River, NJ 08753, would be greatly appreciated.

As I walked by the dockside one evening so fair

To view the still waters and take the salt air,
I heard an old fisherman singing this song,
Won't you take me away boys, my time isn't long.
Wrap me up in my old oilskins and jumpers,
No more on the docks I'll be seen,
Just tell me old shipmates I'm taking a trip, mates,
And I'll see you someday in Fiddler’s Green.

On Fiddler’s Green is a place I've heard tell
Where fishermen go if they don't go to hell,
Where the weather is fair and the dolphins do play,
And the cold coast of Greenland is far, far away.

Where the sky's always clear and there's never a gale
Where the fish jump onboard with a swish of their tails,
Where you lie at your leisure, there's no work to do;
And the skipper's below making tea for the crew.

When you get back in dock and the long trip is through
There's pubs and there's clubs and there's lassies there too,
Where the girls are all pretty and the beer is all free,
And there's bottles of rum growing on every tree.

Now I don't want a harp nor a halo, not me
Just give me a breeze and a good rolling sea,
And I'll play me old squeeze-box as we sail along,
With the wind in the rigging to sing me this song.

We can't believe it.  Capt Dan gone?  We are the folks who bought his sailboat, the Jersey Girl, now known as Lucidity.  We had plans to be in the Keys this coming November and take him out for one more sail on her.  I'm really, really sorry that won't happen.  When he sold us the boat he was as teary eyed as if he was losing a family member, which in a sense he was.  We'll miss you, Capt.